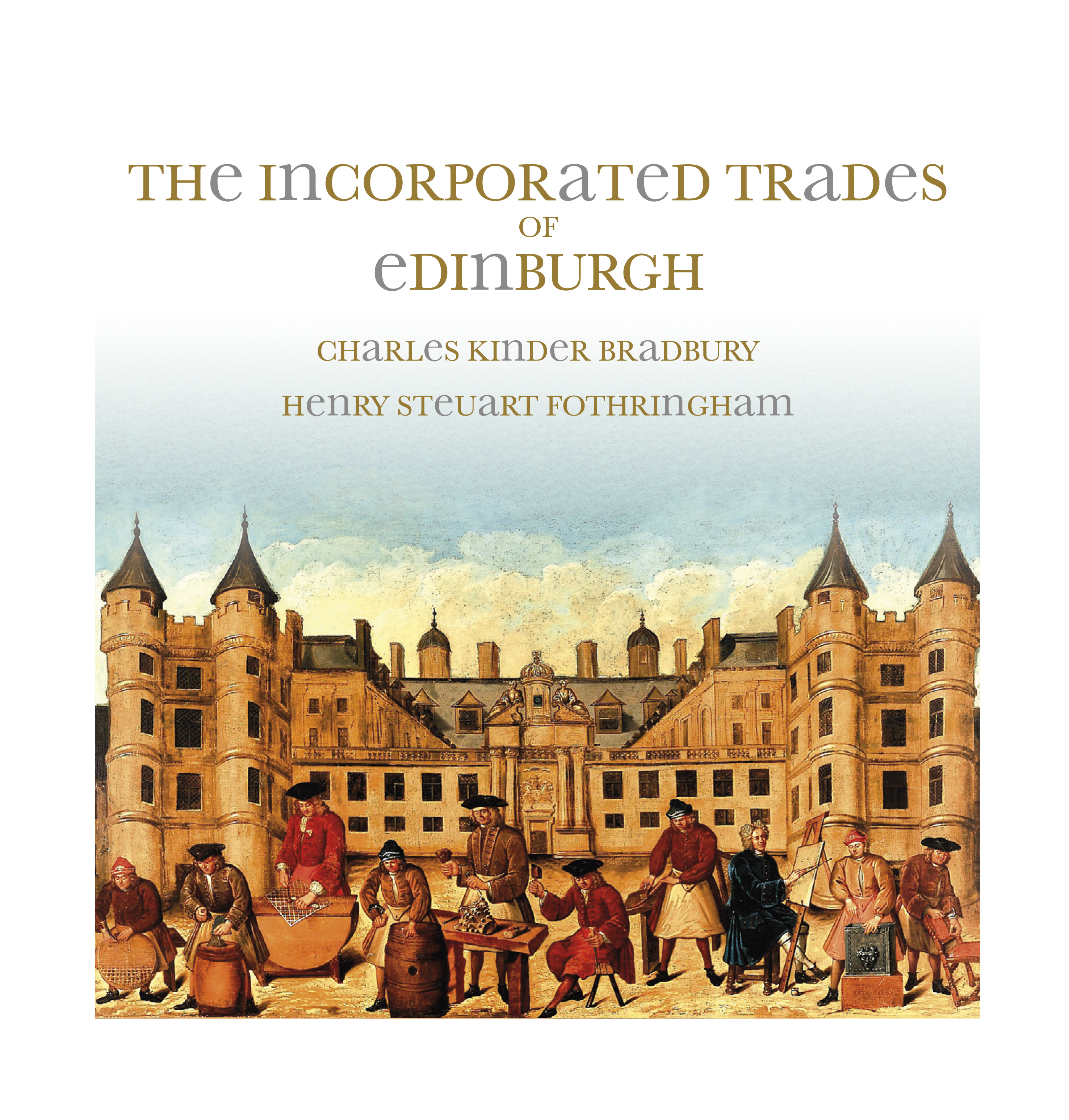 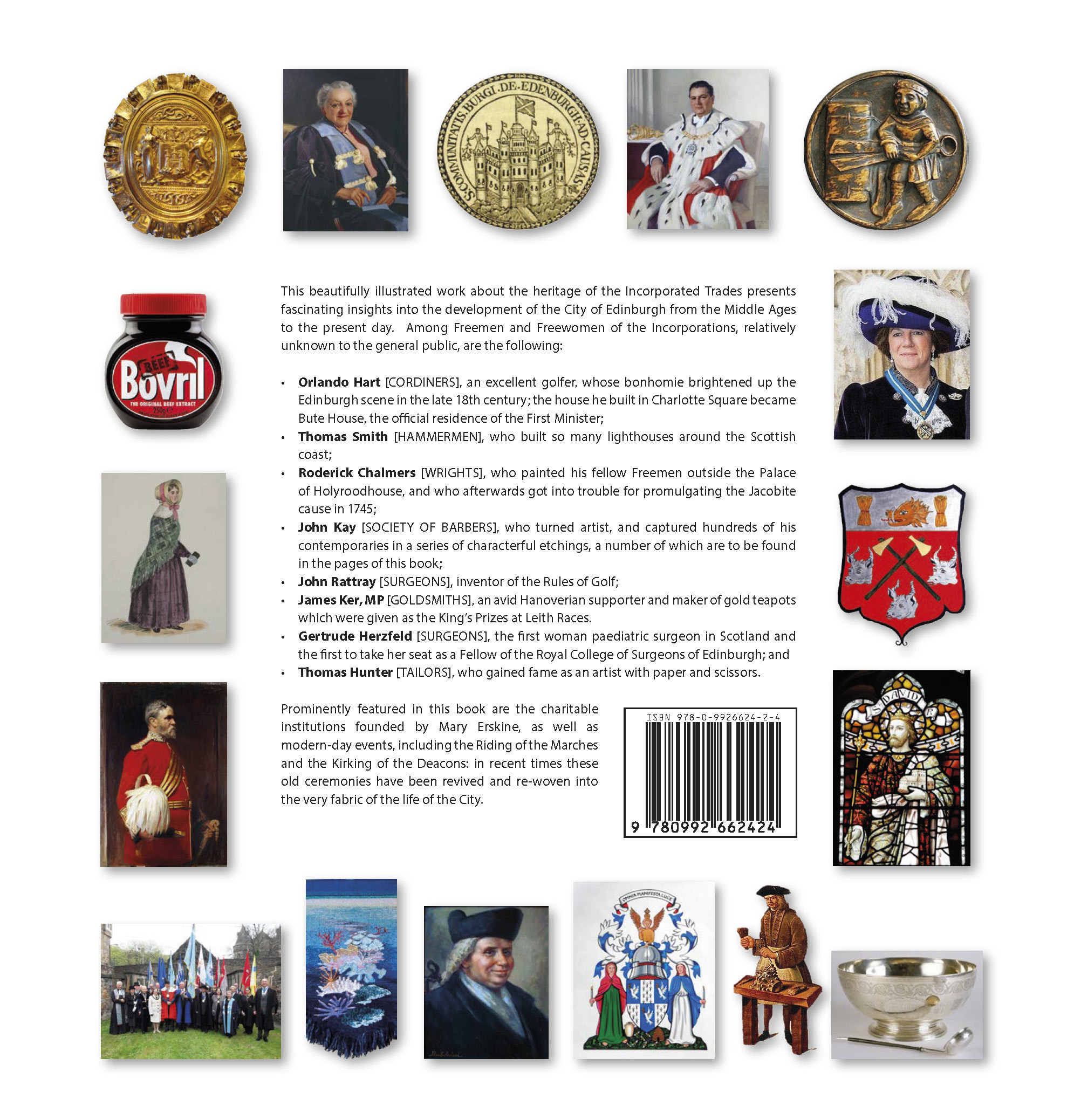 The Incorporated Trades of Edinburgh

This is a unique pictorial record of the Incorporated Trades of Edinburgh: their heritage and development since the Middle Ages right up to modern times. Beautifully illustrated and comprehensively cross-referenced, this publication, the third in a remarkable ‘Heritage’ series, should delight all readers who love the City of Edinburgh.

This book describes the important events leading up to and following the establishment of the Convenery of Trades and its various constituent Incorporations, all with their foundation documents (Seals of Cause), Deacons, Patron and Matron Saints, heraldry, journeymen and apprentices. Highlighted are many historical events which have been of great importance in the lives of the craftsmen of Edinburgh, including the Battle of Flodden, the signing of the National Covenant, the Union of the Crowns, the Jacobite Uprisings and the Industrial Revolution.

Unexpected connections have been made between the Incorporations and many interesting characters: for instance, Thomas Smith and Robert Stevenson, both Hammermen, the founders of a dynasty of lighthouse engineers; Joseph Bell, President of the Royal College of Surgeons of Edinburgh, who taught Conan Doyle and became the model for Sherlock Holmes; and William Jamieson, the entrepreneurial Mason, who manufactured bricks in Portobello and contributed so much to the construction of the New Town.

It is a treasure-chest of knowledge about every Trade, and an enjoyable ‘dipping-in’ book. The diverse Crafts, community leaders and fascinating characters are all portrayed in this easy-to-read compendium. A panoramic Prospect of 18th-century Edinburgh, complete with the coats of arms of all the Incorporations, is to be found at the back of this well-researched volume. 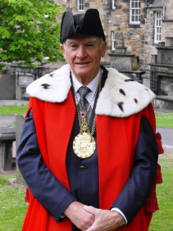 I am delighted to welcome this book about the Incorporated Trades of Edinburgh and to pay tribute to its two dedicated authors. Dr Charles Bradbury, a freeman of the Candlemakers, and Henry Steuart Fothringham, a freeman of the Goldsmiths, have used their combined skills to bring to life in a remarkable manner the past history and present activities of the Incorporations.

Henry has investigated unexplored layers of Convenery history, and without his research much of the past would yet remain hidden. Charles has undertaken much valuable research as well, besides providing the expertise required for marshalling everything together and gathering and co-ordinating the wonderful array of illustrations.

It is a great privilege to hold the position of Deacon Convener of the Trades of Edinburgh and my knowledge of the 500 plus years during which the Incorporations have been in existence has been expanded enormously thanks to this work.

Into the wee small hours, I became engrossed and made good inroads with reading your book. I love the format and the setting out. Everything is perfectly structured and clear. As I am not an avid reader I find the inclusion of photos and illustrations on every page a delight. Quite apart from the history of The Incorporated Trades the additional historical information is marvellous.

This will be my bedtime reading for quite some time as well as a valuable reference book.

The Incorporated Trades of Edinburgh Back Cover 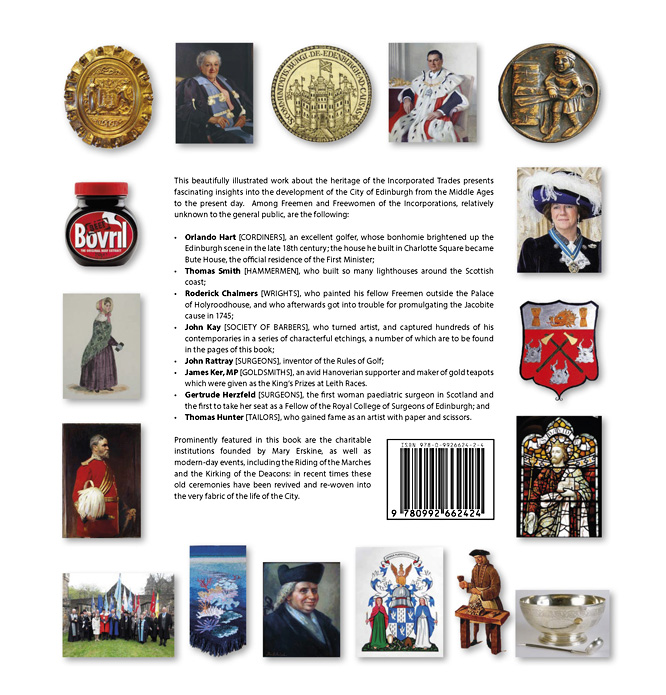